Posted on February 9, 2016 by deltacollegebrockport 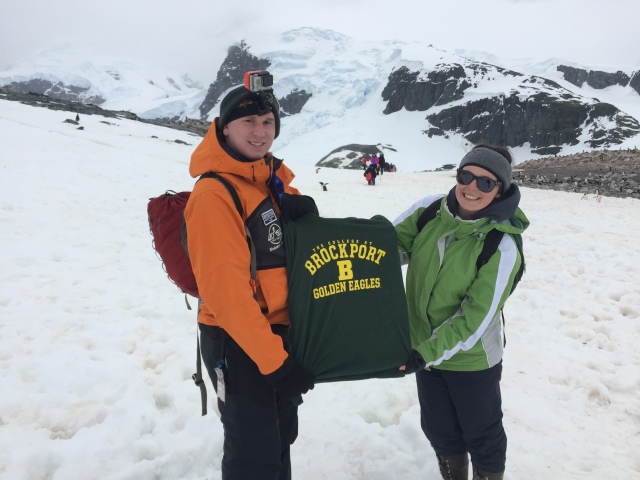 Students have the opportunity to travel to practically anywhere in the world through study abroad. Some of the most popular destinations are Europe, the UK, Asia and Australia. But occasionally we come across the brave souls who choose to venture to some of the most extreme locations on the planet. Delta College proudly claims one of those courageous students as our very own Robert Tyler who traveled to Antarctica over winter break on a consortium trip involving Brockport, Ohio State, and Virginia Tech. Rob is a junior and an Environmental Science, Wetland Ecology major. His unique study abroad experience served as a portion of his Capstone project. The Capstone is specific to Delta and encourages students to complete twelve credits of experiential learning in whatever format they see fit for their personal needs and interests. Rob knew early on that he wanted to study somewhere unique and remote, and Antarctica was a perfect match for him which he describes as “an experience of a lifetime”. Here is his story: 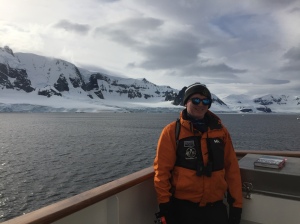 On December 16th, 2015 I began going south. I walked to about the Brockport Aldi’s before my friends pointed out that flying would be faster and gave me a lift to the Airport. From Rochester (ROC) I flew to LaGuardia (LGA) and from there to Ft. Lauderdale (FLL). At Ft. Lauderdale I met up with a friend from Brockport’s meteorology program and the next morning we met up with the students from other schools at Miami Airport (MIA). As a group we flew Aerolineas Argentinas to Buenos Aires, Argentina where we stayed the night in a hotel. The next morning we once again went to the airport and boarded a plane to Ushuaia, a tiny city in Tierra Del Fuego, Argentina. We spent a little time in the city enjoying the culture and traditional lamb and king crab meals before crashing at the lovely Hostel Yakush.

next morning we attended a lecture and discussed our on trip research. We then boarded the ship, the MV Plancius. The Plancius is a retrofitted Dutch navy ship with an ice strengthened hull. The boat measures 296ft and is currently used by Oceanwide Expeditions as a polar cruise ship. Here we began our journey as we sailed through the Beagle Channel and the well known Drake Passage. During those two days of travel we attended lectures from the expedition staff, all of whom have done or are doing research in their respective Antarctic fields. We also began our group meetings and project. I was part of the Seabird group. We went out before every meal and watched for birds which we identified and tallied. We arrived in Antarctica at the end of the second day quickly sailing past the South Shetland Islands.

Students, crew members, expedition staff, and cruise passengers quickly became friends, and together we began our first Antarctic day using zodiac boats to land at Danko Island to snowshoe and see a colony of Gentoo penguins. That afternoon we landed at Couverville and had a zodiac tour around the ice bergs. Here we found a Weddell seal, Gentoo and Adelle Penguins. We then had a debriefing, dinner, group meetings, and chill time at the observation deck. We continued birding throughout. That night I camped in a bevy bag (no tent) on an island in Leith cove. Here I saw a glacier calve in front of me. Everyone was silent and watching in amazement. 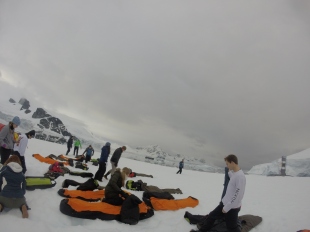 We woke the next morning and ventured to Paradise Bay (a continental landing at Brown research station), and Useful Island. That day we saw Antarctic Shags, South Pole Skuas, Antarctic terns, Gentoo penguins, Chinstrap penguins, Crabeater seal, Weddell seal, and one of only two species of grass that can grow in Antarctica. It was Christmas Eve and the ship had a party that night. If anyone has a better way to celebrate Christmas than Orca’s, friends, and champagne, do let me know.

Christmas Day we sailed through the Lemaire channel and landed at Peterman Island. Here we had Adelle penguins hatching. That afternoon we went to a museum. Port Lockroy is a base operated by The British Antarctic Heritage trust. It operates a post office and a museum of an original research/military base from the 1940’s. Its original function was to stop German ships from using Antarctica and the Drake Passage for military gain during the Second World War.

The next day we landed at Whalers bay and our final stop of Half-moon Island. At Whalers bay on Deception Island we first climbed a volcano before I became the first of the ship to willingly do the most intelligent thing possible, go swimming. A real polar plunge just outside of an Antarctic specially protected area, Half-moon bid us farewell that afternoon with seals, penguins, and a breaking iceberg. We almost left a student who vowed,” To live among the penguins as they do.” He waddled right into the waiting arms of a large Australian man who served as a guide and returned him to the boat. We set sail back across the Drake, bird watching and attending lectures. In our free time we watched movies. Our final day on ship we all presented our preliminary work to the passengers and the crew. The next morning we arrived in Ushuaia and disembarked.

After touring the town of Ushuaia, hiking to Turquoise Lake, and traveling for two days, we returned home to our families with an assigned reflection and research paper, as well as photos to prove the experience was unforgettable.

This entry was posted in Uncategorized. Bookmark the permalink.